I had the good fortune to be interviewed by legendary Chicago DJ Barry Winograd on WDCB in November, 2018 to promote an upcoming gig. 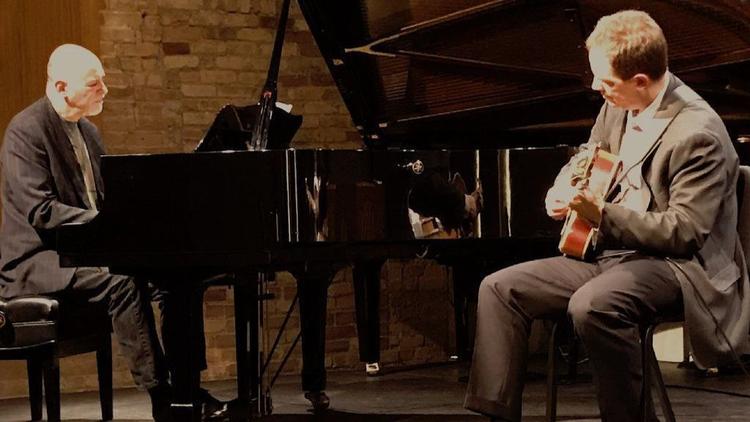 Performing close to home is a real treat for jazz pianist Jeremy Kahn but the Oak Park resident insists that’s not the only reason he loves doing concerts at the Oak Park Arms.

“The people who come to my performances are very appreciative of what I have to offer,” Kahn said. “They show that by their enthusiastic responses. They listen quietly, which is not always the case at my other performances.”

The Jeremy Kahn Duo, featuring guitarist Andy Brown, will perform a Monday Night Concert at the Oak Park Arms on June 25. Kahn estimates that this is the 30th time he has performed at that venue.

The playlist hadn’t been set, but Kahn reported that they will follow a still-to-be-determined theme.

“There are all sorts of themes,” he said. “But they’re mainly based around songs that are by the master composers of the Great American Songbook, either by Richard Rodgers or Cole Porter, Irving Berlin or George Gershwin; or some of the jazz masters like Duke Ellington, Thelonious Monk or Antonio Carlos Jobim.”

The pianist noted that they try to make the majority of the songs recognizable to the audience.

“We’ve seen a lot of the same faces over the years, and we know what they respond to,” Kahn said. “We’ll take requests from the audience if it’s something we know how to play.”

Sometimes, the duo will invite certain people onstage to sing a song.

“People get a kick out of that because it’s someone most of them know quite well,” Kahn said.

Kahn has performed with a who’s-who list of celebrities.

“I had the thrill of playing for Joni Mitchell. That was pretty amazing,” he said. “I played with Dizzy Gillespie when I was in college, and I got to be part of an orchestra that backed up Aretha Franklin.”

For the last six years, Kahn has played every Wednesday night at Andy’s Jazz Club downtown with the Andy Brown Quartet. (Brown doesn’t own the venue.)

“I love everything about playing with Jeremy,” Brown said. “He’s a fantastic all-around musician, master of the piano, and a great person to make music with. We have a lot of the same influences and same things we love about jazz and music in general. He’s such a phenomenal musician, it’s always a lesson for me to get to play with him.”

Brown has performed as a sideman with a number of internationally known jazz musicians, including Anat Cohen and Kurt Elling, as well as working with such Chicago jazz luminaries as Don Stiernberg, Bobby Lewis and Judy Roberts. He also accompanies many Chicago vocalists, including his wife Petra van Nuis.

Brown praised the Oak Park Arms as “a great outlet for jazz musicians. I’ve been playing there in different configurations for a couple of years. Last year, I had a series of different duet partners there, and Jeremy was one of them.”

Brown noted that playing in a duet with Kahn is very different from when they perform together in the quartet.